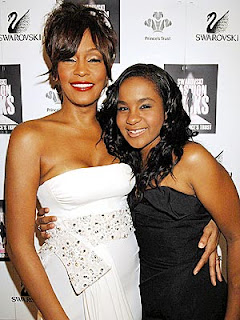 I have a lot to say, way too much to put into a status.
As much as I found Bobby the wrong choice for her.. & he often annoyed the crap outta me, he is far from the cause of her death. Whitney was in that drug life long b/4 he was in her life.
Folk let's keep it real. She was a chick from Newark, NJ.....who was in the modeling & music industry. Just because she was raised in a Christian household didn't mean she was a shelterd girl...HELLLLO us Catholic school girls can tell you. With access we can do anything we want to do....'& that's  what Whitney had...plenty of access. She was a grown azz woman who grew up way too fast...Sadly she admitted she was doing her than long before Bobby was in her life.
They were two addicts who used each other to feed their habit. By no means am I defending Bobby Brown. He had his demons too..Big time.
So everyone...enough w/giving Bobby Brown the spotlight.  Right now I see more news feed about the wrong person.
We lost a gem. So let show her the time.
She was human folks...she had her demons like many artists of many disciplines do....Pay your respect to her...and stop giving Bobby time.  He needs to be a father to his daughter.....As someone who lost my mom  early due to addiction .I can tell you, he is going to have a rough time.. so instead of bashing him...Pray for him.
We'll miss you Whitney.
Posted by Trina Slade-Burks at Sunday, February 12, 2012