The Birth of Afro Boy

This is part of a three part interview I did on artist, innovator & radio personality, Alexie F. Many things have happened for this talented yet somewhat complexed individual. This very emotional cat has a way of making you laugh when you weren’t even prepared. This portion of the interview is part B of our interview. The reason he decided to release this part first, was to put to rest the questions that many of his fans had about his recent departure for the show that many learn his name from; The Zro Hour.


Trina: How long were you part of The Zro Hour?

Alexie F: well 1st it needs 2 be said,,,,,I am a founding member,,,,even though it isn’t being mentioned right now,,,,,,,i have been a founding member of the zro hour for 6yrs,,,ahhhhhh yeah 6 going on 7yrs,,,, the show started on pirate radio in brooklyn,,,galaxy plus a haitian pirate radio station,,,,,, someone suggested to edaye that he should do radio,,,, he took it and ran with it,,,,,i will always give him his props 4 that,,,he asked me if interested in doing the show with him,,,,,i am down 4 whatever music related,,,,,hell I would run naked thru moscow 4 music,,,,,,hahahaha

Trina: What were your contributions in the beginning of the show & how did they differ later on.

Alexie F: it was always financial from the beginning,,,,creative yes,,,,,but it was ALWAYS financial,,,,,,before the resurrection show we had some creative differences & i decided 2 leave the show,,,,,,there was a gap where there wasn’t anything going on ,,,,I think edaye did 1 show during that lag time,,, the zro remained dormant 4 a while,,,,,i suggested that we do it again,,,,,,that came about when i let someone hear the show in my car,,,,,,,i didn’t tell them @ the time that it was me,,,,they didn’t even recognize my voice,,,,they said that the show was great and that the quality was 2 good 2 not continue,,,,i found monster,,, who has mad skills & who even closed out the zro hour 5th anniversary show,,,,i even introduced u into the movement & u pushed 4 bobbito

Trina: Hahaha. Very true. We will talk about that later. One of my favorite shows as you know is the Neosoul show with the Nucomme interview. How did that show come about?

Alexie F: at the time maxwell was hot with the cd NOW,,,,,,,& bilal,,,, big ups 2 bilal,,,,,musiq soulchild who I took edaye 2 see, when musiq was raw,,,,& sweetback which featured maxwell & 3 members from sade’s band ,,,stuart matthewman, andrew hale & paul denman. i met nucomme, who is the first lady of the zro hour & the 1st guest, on the d train playing music,,,it was an automatic connection the 2 of us,,,,,,& I am proud 2 say we r close,,,,she is a vibrant, talented leo,,,,,we share that leo connection,,,,,,she’s like a little sister,,,,as 4 the show itself,,,,i picked all the music,,,,,i picked the guest,,,everything else was just a natural flow.

Trina: Wow. Will you be collaborating with nucomme in the future?

Alexie F: she & i did discuss doing some stuff together right after the neosoul show,,,,,we hung out sometimes,,,but then we fell out of touch,,,,,,she said she would be moving & i just assumed it meant out of the new york city area,,,,, but turns out she is still here & ironically enough has the same number that i originally had,,,so we will see

The Bobbito Garcia Interview: When I initially approached the idea of potentially getting Bobbito Garcia to get interviewed by the Zro Hour, I asked Alexie F if there was an opportunity that the two of them would directly contact him. Reason being is that I had a direct contact that I may be able to get a hold of him. Alexie F. told me to go ahead and see what happens. I went to my contact (thank you Candy) and she told me he is very easy going, and that he would be easy to contact. He really was. And he agreed to do an interview. I contacted both Edaye & Alexie F separately about the opportunity and they were both equally excited. The premise in my approach was the obvious Boricua connection & the admiration from the hosts of Bobbito’s work. They often mentioned him on many of their shows. I had a trip to NYC planned the exact day the interview with Bobbito was to take place.

Alexie F: set the record straight huh??? now we r getting into some emotional shhhhh

Trina: Yes. You and I never really got to discuss this.

Alexie F: when i first got word that it was going to happen,,,i was so excited,,,,so excited that i missed my turn going to the mountains on vacation,,, hahahaha,,,,,,,

Trina: Haha, I didn’t know that!

Trina: Wow, I am sorry I took you there hun.

Trina: Absolutely. …..Were you part of the planning of the New Zro Hour merchandise most recently launched?

Alexie F: no. i was saddened to see that there was merch with my face on it being used without my permission,,, (since then the merchandise with Alexie F.’s face was removed from the line)

Trina: Why are you no longer part of the show?

Alexie F: just before the release of the 5th anniversary cd , there was talk from edaye that he wasn’t gonna be on the grind with the show anymore,,,& i said do what make u happy man,,,,then I got a voice message a few months later saying that he was going to move forward with the show solo

Trina: How did you feel? Change is hard.

Alexie F: yes but necessary,,,,,i have a lot of other things going on,,,,i contributed 2 ur poetry book,,, i have several interviews coming up,,,,,writing projects,,,production projects,,,i stay busy,,,,not 2 mention my beautiful kids,,,the most important part of my life,,,,i love & am proud 2 being a dad

Trina: Do you have any fond memories from The Zro Hour?

Alexie F: absolutely,,,,I didn’t know how 2 hold a mike be 4 the show,,,,i use 2 be nervous & get sick,,,,hahaha,,,be 4 the 1st few shows,,,,the friendship between us (Edaye & Alexie F) started as music related,,,,mutual respect 4 the love of music,,,,we were introduced by a mutual friend(we’ll call him Ron),,,,i was reading a music magazine,,,that i won’t plug cuz their not paying me,,,haha,,,& ron suggested that we need 2 meet,,,,edaye & i also share that leo connection,,,we started doing tracks together,,,,,i would travel from the bronx 2 brooklyn 2 work on the show,,,,no matter what time,,,,early in the morning, late @ night,,,,it didn’t matter,,,i was down 4 whatever 4 the good of the show,,,,,we always did great shows,,,I can’t say that there was 1 show that sucked,,,i always told e that this was a great thing,,,,i always believed in the show & what we did,,,we had our rituals,,,be 4 & during the show that i vowed never 2 tell,,,& still won’t,,,,one of my person rituals was,,,, i would never take out my microphone until it is time 2 do a show,,,,,we never ate before a show,,,@ 1 point we took a break because he was going to audio engineering school ,,,where he landed an opportunity after school to intern for wyclef jean,,,,great memories,,,,,met great artists,,,i don’t regret any of it

Trina: What do your fans mean to you & what are you doing to maintain your connection with them?

Alexie F: WOOOOWWW,,,,my fans mean everything & more, authentically & sincerely,,,,they can follow u till the end of time,,,,when they love what u do they allow u 2 do what u love,,,,what i put into place to maintain a connection,,,though I oversee and manage all my pages, i asked 4 someone 2 assist me because it is a lot,,,and though my assistant has a lot of their own stuff to manage they help keep it all in order,,,1 fan or 1million fans they r all equally important 2 me,,,,i’m a struggling artist,,,,& i love that because i appreciate the hard work involved,,,,i wish i knew how many fans so i can tattoo it

Trina: Hahaha, Dude that would be difficult because it would always change. …..What do your fans have to look forward to from you? 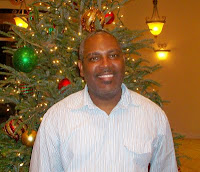 Getting to know South Florida's own Anthony Burks Sr.
Posted by Trina Slade-Burks at Friday, November 20, 2009 No comments: 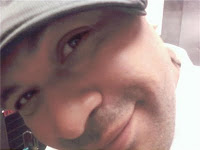 Posted by Trina Slade-Burks at Friday, November 20, 2009 No comments:

In the next coming weeks, I will be inteviewing artists in different disciplines so you can get a true feel as to what is is going on in these artists world.

Silent Auction for Painting by Numbers 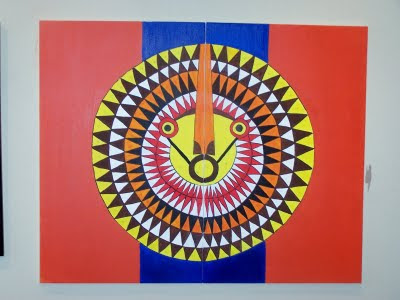 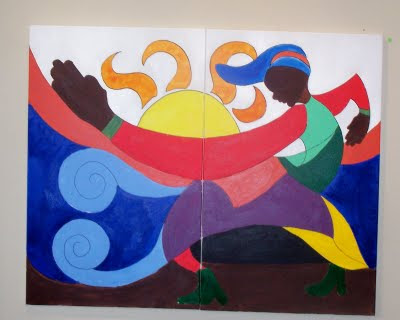 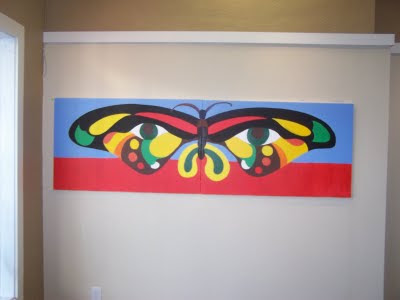 Come to 403 Northwood Rd November 22, 2009 6pm-9pm
Each piece is made up of two 30"x40" cavases. The value of each painting is $2000. Concepts designed by professional artist Anthony Burks & student artists from Dreyfoss HS of the Arts in WPB FL & St Juliana in WPB FL
Posted by Trina Slade-Burks at Wednesday, November 18, 2009 No comments: