Bronx born Angela Bofill May 2, 1954  is an American R&B vocalist and songwriter. Bofill is noted for being one of the first Latina musicians to find success in the R&B market. She was born of Cuban (father) and Puerto Rican (mother) descent. She performed with Ricardo Morrero & the Group and Dance Theater of Harlem chorus.Her  debut album, Angie was released in 1978. 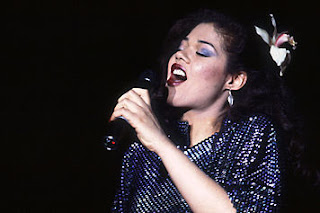 She has recorded under Arista, Capitol, Jive, & Shanachie Records from 1978-1996 & released a live album in Manila & several compilation albums.
Though Bofill has experienced many health issues in recent years including a few strokes, it is reported that she with all the therapy & support, our favorite diva is doing some light touring w/friends in the last couple years most recently at the renowned NYC's Blue Note.
As you can see, nothing is going to stop this song bird from spreading her wings.