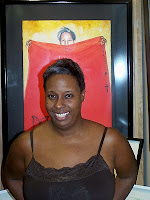 After graduating from college in Fort Lauderdale with a degree in Visual Communications in the late 80’s, the need to work creatively was very important. She moved back to New York City and was re-exposed herself to the creative flow she was longing for.

Since then Trina married a fellow artist Anthony Burks, whom she met in college, and together they have journeyed on to the next level of exposing people to what makes the world a better place. ART.

She has taken part in helping the development of art and culture within in Palm Beach County, Florida in groundbreaking projects with the goal of developing youth and adults alike souls creatively.

Trina published her first book entitled What is My Priority? in June 2009 which is a collaborative of poetry, affirmations & art. She is also writing articles & interviews for blogs Understanding the Arts as well as Afro Boy (with musician/writer Alexie F formerly of online hip hop radio show The Zro Hour) both found on Blogspot.com. From the hip hop generation, she manages to always keep her ear to what is up and coming in underground hip hop seen.
Posted by Trina Slade-Burks at Monday, December 21, 2009