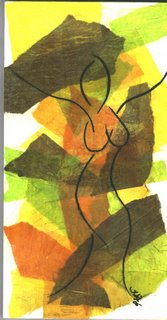 Cornell exhibit features work of minority artists
By Suzanna Mahler
Palm Beach Post Staff Writer
Wednesday, March 29, 2006
Paintings, sculptures, fiber art, and dolls are some features of "Gathering of Kuumba," now showing at the Cornell Museum of Art and History at Old School Square.
The multimedia art exhibit features work from about 15 African-American, Haitian and Caribbean artists.
"This year there are a lot of new people," said Melissa Carter, director of marketing. "One of them is coming from Miami, and another resides outside of Florida, but is here seasonally."
The museum's program assistant Daphne Dowell is one of the founders of Kuumba, meaning creativity in Swahili.
Dowell and two friends thought of the idea about six years ago.
"We were just sitting around one night thinking of what we could do to feature African-American artists," Dowell said. "In the beginning, we thought of doing an 'all women' show and then I thought maybe we could do a 'mixed show.'
"I was working at Old School Square and presented the idea to the museum, and we've been doing it ever since. We started with seven artists, and it's grown to 15 artists."
Dowell's African-American wrap dolls are displayed in the exhibit.
"People like the fact that it is an African-American show, because most of the time when you go to an art show, we are the minority," Dowell said. "In this show, we are the majority. It gives us the chance to exhibit and show our work."
The artists have a range of experience, which makes for an interesting show, Carter said.
"People like the diversity of the styles in the media," Carter said. "It's a very exciting show, because each of these artists brings a lot of different inspirations to their work.
"Artists are from all backgrounds — some of them are self-taught; some have been trained; some have exhibited around the world and others are purely local."
"Gathering of Kuumba" is showing through June 3 at the Cornell Museum at Old School Square, 51 N. Swinton Ave.
Posted by Trina Slade-Burks at Tuesday, March 28, 2006

Is this your piece? Can we get a little background? LOL

Media is tissue paper, matte medium, paint pen on redwood board varnished. It is one of a four piece series. I started doing these when I was teaching my students about collage making. I explained to my students that collage is not just cutting pix out of a magazine. It is about layers of different materials overlapping. The dancing lady concept is about me. I wanted to be a dancer, but when my mom passed, I didn't continue this journey. All four images have semi-full figured women in a dance pose. This one is jazz enphasis on the upper portion of the body.

Wow, that is an interesting story. Glad you included it with the imagery.

Thanks. I have it on exhibit at Kuumba